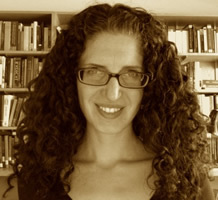 Yasmin Solomonescu (Yass-MEEN Solomon-ES-coo) specializes in British Romanticism with particular interests in persuasion and rhetoric, cognition, epistemology, and literary theory. What unites these interests is the question of literature’s role in representing and eliciting new ethical and political sensibilities—a question that involves consideration of the Romantic period’s emerging scientific psychology and revolutionary social and political movements, as well as of the distinctive work of literary language, genre, and form. Solomonescu is currently writing a book entitled Romantic Persuasions that considers how Romantic writers fundamentally reconceived of the theory and practice of persuasion, notably by insisting on the ethical and aesthetic value of persuasions that are at best provisional. The book makes a wider case for the importance of this distinctive sense of persuasion for literary theory and criticism today. The project has received the support of fellowships from the National Humanities Center, USA, and Chawton House, England. Related work in progress includes an essay on “Rhetoric and Gender” for the Cambridge History of Rhetoric and a co-edited collection entitled Persuasion after Rhetoric stemming from symposia co-organized in 2018 and 2019.

Solomonescu’s first book, John Thelwall and the Materialist Imagination, advances the critical recovery of the reformer and polymath John Thelwall and shows to what extent Romanticism’s belief in the imagination as an agent of social and cognitive change was bound up with the developing sciences of body and mind.

Solomonescu serves as Reviews Co-Editor for the Keats-Shelley Journal. She also co-founded the John Thelwall Society and served from 2011­ to 2019 as its North American Officer. Before pursuing graduate studies in English, she studied journalism and interned at Time, the Globe and Mail, Canadian Geographic, and the Networks of Centres of Excellence. As a research assistant to the Canadian Senator Joan Fraser, she also worked on a Senate study of the Canadian news media.