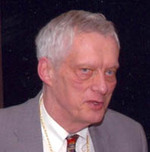 John Sitter specializes in eighteenth-century literature and contemporary ecological literature and theory, teaches poetry, satire, and fiction from the Renaissance to the present, and team teaches in the undergraduate Minor in Sustainability. He is author of The Poetry of Pope's "Dunciad,” Literary Loneliness in Mid-Eighteenth-Century England, which won the Louis Gottschalk Prize awarded by the American Society for Eighteenth-Century Studies, Arguments of Augustan Wit, and The Cambridge Introduction to Eighteenth-Century Poetry, which was named an Outstanding Academic Title of 2011 by Choice magazine. He is editor of The Cambridge Companion to Eighteenth-Century Poetry and two volumes of The Dictionary of Literary Biography. Other recent work includes a chapter on poetry from 1740 to 1790 for the revised Cambridge History of English Literature, a chapter on the "poetry of melancholy" for the Blackwell Companion to British Literature, and articles on Samuel Johnson, climate change, and academic responsibility. He received the 2014 Sheedy Excellence in Teaching Award given by the College of Arts & Letters.