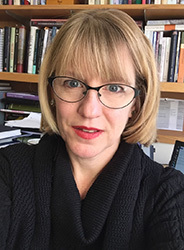 Specialty: Nineteenth-century British and Irish literature, with a special emphasis on the novel

Maurer is currently at work on two book projects that explore fiction whose realism doesn’t quite meet canonical criteria. Her book project, “Reading with Care,” examines fiction from the 1780s-1880s which was closely associated with philanthropic projects. The project examines canonical fiction by Charles Dickens and Elizabeth Gaskell alongside less well-known fiction by Sarah Trimmer, Hannah More, George Borrow, Charles Kingsley and Charlotte Yonge, in order to question the assumption that realism’s ethical force lies in its intensive documentation of human interaction.  She is also at work on a book project entitled “Referencing Nineteenth-Century Ireland,” which surveys Irish literary realism, paying special attention to the narrative strategies used by authors like Maria Edgeworth, Charles Lever, John Banim, William Carleton, and Emily Lawless to gesture toward the world outside the text.

Her first book, The Dispossessed State: Narratives of Ownership in Nineteenth-Century Britain and Ireland (Johns Hopkins University Press, 2012), explores how both British and Irish writers saw Ireland as the site of a unique, culturally specific style of ownership, far different from the individual, absolutely alienable property of the capitalist marketplace.

Maurer teaches classes primarily on the Victorian novel, on the idea of national identity in Romantic and Victorian fiction, and on the connections between Victorian fiction and its steampunk heirs. She has supervised dissertations that explore the relationship of nineteenth-century literature to religion, to Ireland and the Celtic regions, to children’s literature, and to gender studies. She especially enjoys her work advising undergraduate honors theses, on topics ranging from 18th century novels to 21st century feminist dystopias, and everything in between.