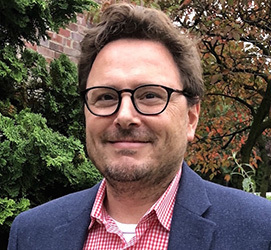 Areas of Research and Teaching: English and American Literature 1550-1800; Law, History, and Political Thought; First Amendment Law; Freedom of Expression in the Digital Age; US and Comparative Constitutional Law.

Professor Elliott Visconsi is Associate Provost and Chief Academic Digital Officer for the University of Notre Dame. A scholar of early modern English literature, freedom of expression, and First Amendment law, Visconsi has been at Notre Dame since 2010.

In the Provost’s Office, Elliott leads strategy and implementation of university-wide learning and teaching initiatives, including but not limited to online and digital learning, industry-university partnerships, inter-institutional collaborations and other emerging modalities for higher education. Elliott Visconsi is committed especially to discovering the collaborative possibilities of digital learning and promoting student-centered pedagogy. He is also a committed advocate for liberal education and a believer in the transformative potential of the undergraduate experience. He tries to build a student-centered pedagogy in all of his classes, and has experimented with class formats (lecture, seminar, online, hybrid), emerging pedagogies, and active strategies (role-playing games, moot court, team competitions) to empower and guide effective student learning in the cross-disciplinary humanities.

Recognizing that media-rich interactive software can lower the entry cost of reading Shakespeare and other challenging works, in 2011 Visconsi designed a software system for teaching and learning on mobile devices with the support of Notre Dame’s Office of Research. This software was the genesis of a startup company, Luminary Digital Media, which he co-founded with Katherine Rowe (President of the College of William and Mary).  Luminary publishes enhanced reading and study applications for the iPad, Kindle, and other formats. To date, Luminary has published eight (8)  titles, chiefly in partnership with the Folger Shakespeare Library and Simon & Schuster. They are The Tempest for iPad, Hamlet, Romeo & Juliet, A Midsummer Night’s Dream, Othello, Macbeth, Richard III, and Julius Caesar. Luminary’s product has received wide acclaim, including credit from Times Literary Supplement for creating a “new form of Shakespearean commentary.”  Chair of Luminary’s Board of Directors, Elliott has been involved in all aspects of the startup process, including fundraising, intellectual property, patents, technology licensing, business development, contract negotiations, product design and architecture. In the domain of software, he has a particular affinity for product architecture and user experience design.

Elliott’s scholarly work is located at the nexus of literature, law, and political thought chiefly in the seventeenth century. The persistent aim of his work is to understand how law is constituted and negotiated within culture as well as how literary texts provoke and challenge those habits of thought necessary for judgment, citizenship, and belonging. Currently Elliott is finishing his second scholarly book “The Struggle for Civil Religion: Church and State in the Seventeenth Century English World,” which a study of the rise of a recognizable "civil religion"—a set of secular habits, rituals, professions, and practices of collective religiosity indexed to the historical self-understanding of the nation—in later seventeenth century England. Some of the key topics in this study include the rise of blasphemy law, toleration and corporate sovereignty in 17th century Bombay, race war in Massachusetts Bay. The implications of the book reach forward into contemporary First Amendment church-and-state jurisprudence. You can read some of the early manifestations of this project in Representations, Raritan, and in other venues.

His first book Lines of Equity: Literature and the Origins of Law in Later Stuart England was published by Cornell Univ. Press in 2008. His ELH article on Oroonoko, written while a PhD student at UCLA, is still one of his favorites. He has also written about allegiance in Shakespeare’s The Tempest, Nadeem Aslam’s Maps for Lost Lovers and blasphemy law, and a wide variety of literature and law topics in the early modern period.

Elliott has won distinguished fellowships, including a ACLS Fellowship and a Mellon Foundation New Directions Fellowship. Visconsi is also the co-founder (with Professor Patrick Griffin) and director of the “Global Dome” London-based Summer PhD Accelerator Seminar in the Humanities.