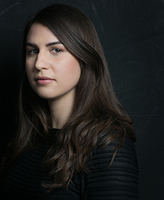 Azareen Van der Vliet Oloomi is the author of the novel Call Me Zebra (Houghton Mifflin Harcourt, 2018) winner of the 2019 PEN/Faulkner Award for Fiction, the John Gardner Award, and longlisted for the PEN Open Book Award. She received a 2015 Whiting Writers Award and a National Book Foundation “5 Under 35” award for her debut novel, Fra Keeler (Dorothy, a publishing project, 2012). Her work has been supported by a Fulbright Fellowship, a MacDowell Fellowship and a Fellowship from ART OMI and has appeared in Granta, Guernica, The Paris Review, BOMB Magazine, and the Los Angeles Review of Books among other places. Her work has been translated into half a dozen languages. She is the founder of Literatures of Annihilation, Exile and Resistance, a bi-annual symposium and lecture series that focuses on the study of literatures that have been shaped by histories of territorial and linguistic politics, colonialism, military domination and gross human rights violations. She serves on the Board of Advisors for Notre Dame's Initiative on Race and Resilience.