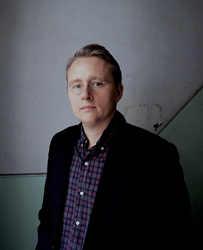 Roy Scranton is the author of Learning to Die in the Anthropocene: Reflections on the End of a Civilization (City Lights, 2015), the novel War Porn (Soho Press, 2016), and the essay collection We're Doomed. Now What? Essays on War and Climate Change (Soho Press, 2018). In addition, Roy co-edited Fire and Forget: Short Stories from the Long War (Da Capo, 2013) and What Future: The Year's Best Ideas to Reclaim, Reanimate, and Reinvent Our Future (Unnamed Press, 2017). His short story "Homecoming" appeared in the anthology Baghdad Noir (Akashic Books, 2018), and his essays, journalism, fiction, interviews, and reviews have appeared widely, including in Texte zur Kunst, Frieze, the New York Times, The Nation, Prairie Schooner, and Rolling Stone. Roy's New York Times essay “Learning How to Die in the Anthropocene” was selected for The Best American Science and Nature Writing 2014, and his essay “The Terror of the New” was selected as a notable essay in Best American Essays 2015. He won the Theresa A. White Literary Award for short fiction (2009), was the recipient of a Mrs. Giles G. Whiting Fellowship in the Humanities (2014–2015), was a post-doctoral fellow at the Center for Energy and Environmental Research in the Human Sciences at Rice University (2016), and won a Lannan Literary Fellowship in Fiction (2017). Roy has two books forthcoming next year, Total Mobilization: World War II and American Literature (University of Chicago Press), a monograph on World War II, American literature, and the politics of trauma, and I Heart Oklahoma! (Soho Press), an apocalyptic genderqueer post-truth musical romp through the deathscape of the American Dream. His next project is an autofiction about a CIA plot to infiltrate the transcendental realm of potential literature.