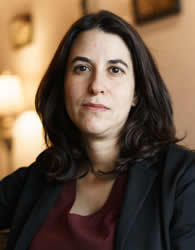 Professor Marcus’s current book project, Political Disappointment: A Partial History of a Feeling, argues that the defining texts in twentieth-century American cultural history are records of disappointment. Bringing together an interdisciplinary archive that runs from Reconstruction’s aftermath through the Reagan era, this book tells a new cultural history of the century by analyzing the Nadir prose of W.E.B. Du Bois, Charles Chesnutt, and Pauline Hopkins; the Popular Front music of Lead Belly and the post-communist fiction of Tillie Olsen; the Black Power soundscape of a 1966 march in Mississippi, and Grace Paley’s meditations on the racial politics of the postwar left; feminist poetry and theory from the advent of right-wing backlash; and queer art and literature from the AIDS activist movement.

Professor Marcus’s first book, Girls to the Front, a critical and cultural history of the 1990s punk movement Riot Grrrl, was published by Harper Perennial in 2010 and was a National Award for Arts Writing finalist.

Professor Marcus is the author of an article about Charles Chesnutt that was published in the journal American Literature in spring 2019. In addition, her essays and criticism on art, music, literature, and politics have recently appeared in critical venues such as Artforum, Bookforum, and Texte zur Kunst; mainstream publications including the New Republic, the Los Angeles Times, the Nation, and CNN.com; academic-adjacent forums such as Public Books, Post45, and the Los Angeles Review of Books; and in the books The Idea of the Avant-Garde (Manchester University Press, 2014), The Essential Ellen Willis (University of Minnesota Press, 2014), and No Regrets (n+1, 2014).