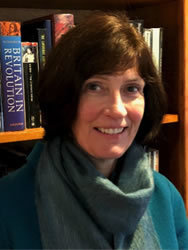 Laura L. Knoppers’s primary research focus is on Milton’s works and life in religious, political, and cultural context.  She has written books on Milton’s oppositional poetry in Restoration England and on Milton’s Eve in relation to courtly representations of marriage and family; her scholarly edition of Paradise Regained and Samson Agonistes broke new ground in book history and the history of reading, and she served as editor of Milton Studies from 2009-2018. Knoppers also teaches and writes about transatlantic early modern women writers, especially Margaret Cavendish, as well as the English Revolution, and Restoration literature and politics, including satire. Knoppers is currently writing a book on luxury, cultural politics, and the court of Charles II and editing the seventeenth-century volume in the Oxford History of Poetry in English. A regularly-invited lecturer in national and international venues, Knoppers has received support for her research from the National Endowment for the Humanities, the Bibliographical Society of America, the Pew Charitable Trusts, and the Folger Shakespeare Institute