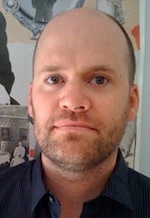 Johannes Göransson has a restless approach to form. His books tend to traverse, question, corrupt and meld different forms, media, genres and languages. He has written a book of epistolary poems, a book as an impossible pageant, two books of poetry based on a failed crime novel, and a book of morphing translations. He is currently working on book of lyrical poems that derive their rhythm from my attempt at bringing Swedish and English together. Since he began writing he has been interested in the volatile relationship between text and body. He has been drawn toward the impure – in both form and content.

Over the past 20 years, he has also translated a number of books, mostly by contemporary Swedish poets (Aase Berg, Ann Jäderlund, Johan Jönson, Helena Boberg and Eva Kristina Olsson); but also works by Finland-Swedish poets (Henry Parland and Gunnar Björling) and a Korean poet (Kim Yideum). Since 2005, he and Joyelle McSweeney and have run the press Action Books, an international press that creates transnational conversation between poets from around the world. He has also written extensively about translation, including the book Transgressive Circulation: Essays on Translation.

He teaches classes on poetry writing, modern and contemporary poetry, translation and translation theory, as well as a multimedia classes on the grotesque, the weird and the uncanny. As a Creative Writing teacher he believes it is fundamental for classes to develop frameworks for reading each other’s work in interesting and generative ways, rather than trying to hew the work to status quo standards. He believes it’s his role to help students read work – including their own and that of fellow students - that challenge them, and to challenge students to write the work that feels most urgent to them.