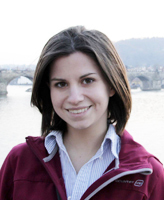 English and anthropology major Caitlin Wilson traveled down the rabbit hole for her senior thesis, which examines the connection between Victorian children’s literature and ethnography, or the anthropological study of customs and cultures.

“I’m arguing that this anthropological genre influenced Victorian authors to write about ‘fantastic’ cultures in made-up worlds in a realistic manner,” says the University of Notre Dame student, “much as many anthropologists wrote about new ‘native’ cultures around the middle of the 19th century.

“The most interesting research I’ve found involves a new interpretation of Lewis Carroll’s text Alice’s Adventures in Wonderland, which suggests that many of the crazy and illogical events that occur in the text can actually be viewed as games and/or rituals. This became a jumping-off point for my own research.”

Whether it’s literary criticism or creative writing, says Professor Chris Vanden Bossche, director of undergraduate studies for the Department of English, the senior thesis project helps students prepare themselves for a wide range of career and postgraduate opportunities.

The senior thesis is a yearlong academic challenge that further develops skills that all English majors acquire, skills such as critical reading, analysis, and writing, Vanden Bossche says.

“Because it goes into greater depths than the typical writing assignment, students also learn how to organize a complex argument and then present it clearly,” he says. “The senior thesis enables a student to demonstrate that she or he can undertake a major project and follow through on it.” 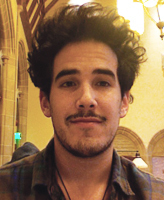 Joseph Horan, an English major focusing on creative writing, says the process has been intense, yet rewarding. “It’s an exercise in focus and determination and discipline to work on a project for a whole year,” he says.

“As a culminating project, this somehow calls on everything I’ve ever read or written in my years as an English major. As a student of literature, I hope that my work is literary—and inspired by what I have read and discussed for so many hours with classmates and professors.”

“Despite working and living among so much suffering and poverty, he can’t get things right in his own head,” Horan says. “He is afraid of dying, he is lonely, and he is a hypochondriac. Throughout the novella, he tries to figure out why he’s in São Paulo and when it is time to go home.”

Both Horan and Wilson say the level of commitment required to complete a senior thesis has helped them learn critical lessons about project planning and time management.

“Writing without the normal pressures of deadlines and grades demands a lot more practical skills than I previously thought,” Horan says. Those same skills, he says, will be a valuable asset after graduation, whether he chooses to go into a service program or the business world.

The experience is also excellent preparation for graduate school, adds Wilson. “While I have written many, many papers as an English major, the length of this one is a new component,” she says.

But one of the most exciting parts of the senior thesis culture in the College of Arts and Letters, Vanden Bossche says, is the opportunity for students to work one-on-one with a faculty member on a project of their own devising.

“The students become experts on their topics, and use that expertise to develop a fresh perspective on it—I am repeatedly impressed by their mastery of the material,” he says.

“This level of research is also new to me,” Wilson says. “I’ve been able to read more children’s literature than I could ever justify otherwise, and it has been very rewarding to be able to incorporate my anthropology major.

“Overall, I’m really enjoying the opportunity to delve into the subject.”