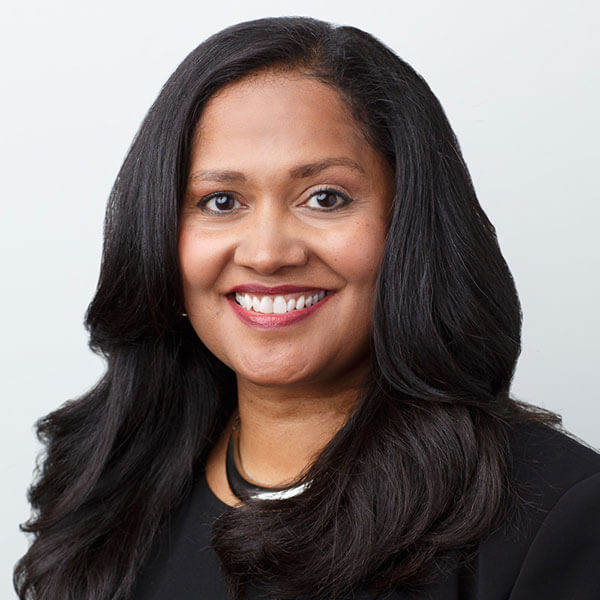 Evelyn Diaz’s career has taken her to the top of Chicago’s governmental, social service, and nonprofit sectors.

And at every stop along the way, Diaz ’92 has relied on skills she cultivated as an English major in Notre Dame’s College of Arts and Letters.

“There isn’t a day that goes by when I am not using the critical and analytical thinking skills I developed at Notre Dame,” Diaz said. “And there hasn’t been a single day when my career hasn’t benefited from the exceptional oral and written communication skills I honed there.”

Her liberal arts education, she said, now makes her more effective in her role as president of Heartland Alliance, a collection of five nonprofit organizations based in Chicago and operating in 12 countries, serving 400,000 of the most marginalized people in society.

“The skills I gained as an English major feel like a prerequisite to the work I do now — planning, executing a course of action to accomplish objectives, and managing complex projects,” Diaz said. “Leaders have to communicate well to achieve understanding, to mediate, to persuade.”

‘Your destiny is to go to college’

Diaz was born in Chicago, where her Puerto Rican parents moved when they were teenagers. Her parents divorced when she was 5 years old, and her mother raised Diaz and her two older brothers. While her mother worked and put herself through community college, she encouraged Diaz to focus on her schoolwork.

“I was a bit of an anomaly in my family in that I was very quiet, I liked to read, and I was really good at school,” Diaz said. “My mom saw my potential and she would say to me, ‘Your destiny is to go to college.’”

Diaz fell in love with Notre Dame during her first trip to campus.

“I visited once and just knew that I had to go to Notre Dame,” Diaz said. “And so I poured my heart and soul into the application, and I prayed a lot.”

As the first person in her family to go to a four-year university, Diaz found many surprises in college. Her professors challenged her to push the limits of her potential — something Diaz had never experienced before, and it’s something that has stuck with her.

“The most important life lesson for me was the importance of setting a high bar for people and then believing in them and supporting them,” she said.

Diaz began college planning to become an attorney and majored in English because it would help her in law school. Her coursework, though, also opened her eyes to new perspectives.

“The small classes in Arts and Letters really encouraged inclusive and active discussions, which taught me to see and appreciate other points of view,” she said. “And I think those are the exact skills that have the power to change the world.”

“The small classes in Arts and Letters really encouraged inclusive and active discussions, which taught me to see and appreciate other points of view. And I think those are the exact skills that have the power to change the world.”

Before applying to law school, Diaz decided to volunteer for a year, teaching English to grade schoolers and high school students in rural Costa Rica. There, she found her true passion for service.

“In that context, people just didn’t care that I went to a fancy university or that I wanted to be a lawyer,” she said. “They just wanted to know who I was as a person. And it really forced me to ask myself, ‘What do I care about?’

“From that moment on, I fell in love with social work and knew that’s what I would spend my career doing.”

Diaz returned home just as her mother — who ran a free health clinic for undocumented immigrants and homeless people — underwent surgery. During her mother’s recovery, Diaz stepped in to run the clinic, solidifying her desire to pursue her new career path.

After several years of direct service work, Diaz began graduate school at the University of Chicago, where she received a master’s degree in social service administration.

She began working for the Chicago Jobs Council, where she drew the attention of Mayor Richard M. Daley’s office. She was recruited to serve as the mayor’s deputy chief of staff, a position she held for two years before being tapped to lead the Chicago Workforce Investment Council.

From there, newly elected Mayor Rahm Emanuel chose Diaz to run the city’s Department of Family and Support Services during his first term.

“My department at the city had a $330 million budget. We were impacting 300,000 lives each year. So the next thing for me was going to have to have a really big impact,” she said of her decision to leave city government in 2015. “And Heartland Alliance was the holy grail — a really strong organization with a great reputation. It was just a really important opportunity that I couldn’t pass up.”

‘The hardest work of my life’

Heartland Alliance provides housing, health care, jobs, and justice services to some the world’s most vulnerable people, Diaz said, including those who are homeless or living in extreme poverty; survivors of torture, trafficking, and domestic abuse; and people with mental illness or substance abuse disorders.

“I’m very happy and doing the hardest work of my life so far,” Diaz said.

In her nearly two years at the helm of Heartland, Diaz has led a reorientation of the organization, aiming to create more of a true alliance than a loose collection of nonprofits.

Last year, Heartland also announced a major new initiative to reduce Chicago’s gun violence epidemic by intervening in the lives of those most likely to be involved.

“At the same time that we’re doing this organizational change inside, we’re also launching probably the biggest program intervention — very high-stakes — that Chicago has seen in a very long time. So we’re doing transformative work, and there’s more to come,” Diaz said.

As her career has taken her to new heights, with the opportunity to positively influence more lives than ever, Diaz remains grounded in the strong foundation she built at Notre Dame.

“The real game changer for me was going from my suburban high school to this place where I was called to be bigger and better than I knew myself to be,” she said. “I had the right people around me and the right education to really do something with that.”

Originally published by Jack Rooney at al.nd.edu on March 07, 2018.