Paul Cunningham, a 2015 graduate of Notre Dame’s Creative Writing MFA program and winner of the Sparks Prize fellowship, showcased his work in February at the Hammes Notre Dame Bookstore.

The fellowship, named for author Nicholas Sparks ’88, awards $20,000 to a new graduate of the program and allows him or her to stay on campus for a year to focus on completing a book. 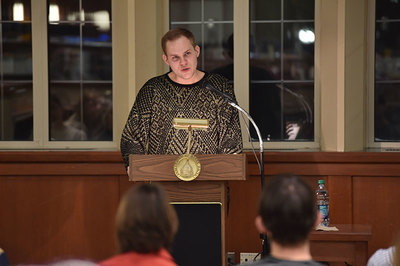 The MFA program, Cunningham said, opened him up to a wide variety of writing models.

“When I came into the program, I had some biases and some preconceived notions about what certain writing should be, and I think I’m a lot more open-minded to various forms now,” he said.

Cunningham founded Radioactive Moat Press in 2009 and is the manager of the online journal Deluge. With past editing positions at Action Books and Action, Yes, he is currently a contributing editor of Fanzine.

Joyelle McSweeney, an associate professor of English and director of the Creative Writing Program, said that while MFA students come to Notre Dame from diverse backgrounds and areas of stylistic inquiry, they are united by an enthusiasm for and curiosity about writing life and the use of words across forms, genres, languages, and media.

Cunningham credits theatre workshops with Notre Dame’s Department of Film, Television, and Theatre for making him more comfortable speaking in front of crowds, as well as other modes of vocal exercise and presentation—skills that were on display during his reading, with selections covering a wide range of forms."Paul exemplifies what's best about our program: he's brilliant, inquisitive, energetic, and kind. He realizes both the aesthetic and the political potential of literature,” McSweeney said. “His work as a publisher, editor, and someone who has been supporting a very dynamic literary conversation in multiple media for years truly distinguishes him as a writer, especially given his youth."

He began the evening with a sample of the manuscript that won him the Sparks Prize, The House of the Tree of Sores. He also read selections from GOAL/TENDER MEAT/TENDER, a five-act lyrical play first published in 2015 by Horse Less Press and currently in development to be published in a longer form. 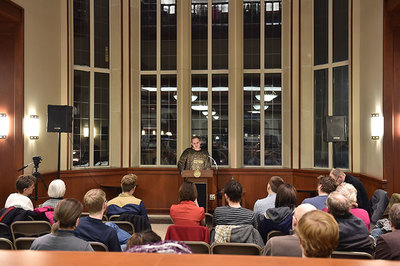 He also read from his collection of poems, called Drone Waggle, and a short story, “Interference.”

It was a homecoming to a program Cunningham simply deems “supportive.”

“My peers felt more like a family most of the time,” he said.

"We are incredibly lucky to have the Sparks Fellowship for our students,” McSweeney said. It gives them the boost and the bridge they need to continue their writing life after graduating from the program."Past winners of the Sparks Prize include Kelly Kerney (Born Again), Angela Hur (The Queens of K-Town), and Jackson Bliss. The 2015-16 prize was judged by Michael Mejia, author of Forgetfulness. Judges in previous years have included Kwame Dawes, Pablo Medina, and Percival Everett.