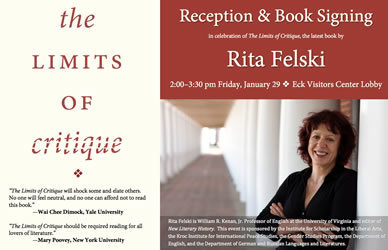 The English Department cordially invites you to an open reception and book signing with Rita Felski Friday, January 29, in the Eck Visitors Center lobby from 2:00 to 3:30 pm. This event celebrates Professor Felski's long-awaited book The Limits of Critique, which recently appeared from the University of Chicago Press:

The Limits of Critique is already the most talked-about work of critical theory in years.

Rita Felski is the William R. Kenan, Jr., Professor of English at the University of Virginia and editor of New Literary History. Professor Felski has done influential work in feminist theory and genre theory, and her recent work has shaped an emerging area sometimes described as "post-critique." She will talk briefly about her new book, which will be available for purchase, as will some of her older work, notably The Uses of Literature and Literature after Feminism.