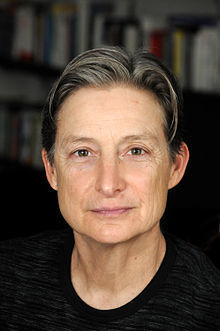 The English Department is pleased to announce that our 2015 Yusko Ward-Phillips lecturer is Judith Butler. Professor Butler will speak at 7:00pm Thursday, April 9, on "The Ethics and Politics of Non-Violence" in the McKenna Hall Auditorium. This event is free and open to the public, no tickets required.

Judith Butler is Maxine Elliot Professor in the Department of Comparative Literature and the Co-director of the Program of Critical Theory at the University of California, Berkeley, where she served as Founding Director. She is the author of Gender Trouble: Feminism and the Subversion of Identity (1990) and Bodies That Matter: On the Discursive Limits of "Sex" (1993). She was recently the recipient of the Andrew Mellon Award for Distinguished Academic Achievement in the Humanities (2009–13). She received the Adorno Prize from the City of Frankfurt (2012) in honor of her contributions to feminist and moral philosophy as well as the Brudner Prize from Yale University for lifetime achievement in gay and lesbian studies.

She is as well the past recipient of several fellowships including Guggenheim, Rockefeller, Ford, American Council of Learned Societies, and was Fellow at the Institute for Advanced Study at Princeton and at the College des Hautes Etudes in Paris. Recently she was Wun Tsun Tam Mellon Visiting Professor of the Humanities at Columbia University. She has received honorary degrees from Université Bordeaux-III, Université Paris-VII, Grinnell College, McGill University, and University of St. Andrews. In 2013 she was awarded the diploma of Chevalier of the Order of Arts and Letters from the French Cultural Ministry.

The Yusko Ward-Phillips Lecture, organized and sponsored each year by the Department of English, honors two devoted and distinguished former professor of English at the University of Notre Dame: Leo L. Ward, C.S.C., and Charles Phillips. Rev. Ward taught at the university and received many honors as a writer of short fiction. A poet, critic, and playwright, Charles Phillips was a faculty member who was instrumental in developing the university’s theater program. The Ward-Phillips Lectures were inaugurated as a lecture series in 1966, and are generously funded by the Yusko Endowment for the Department of English. Past Yusko Ward-Phillips lecturers include Elie Wiesel, Cornel West, Terry Eagleton, Edward Said, Seamus Heaney, and Margaret Atwood.