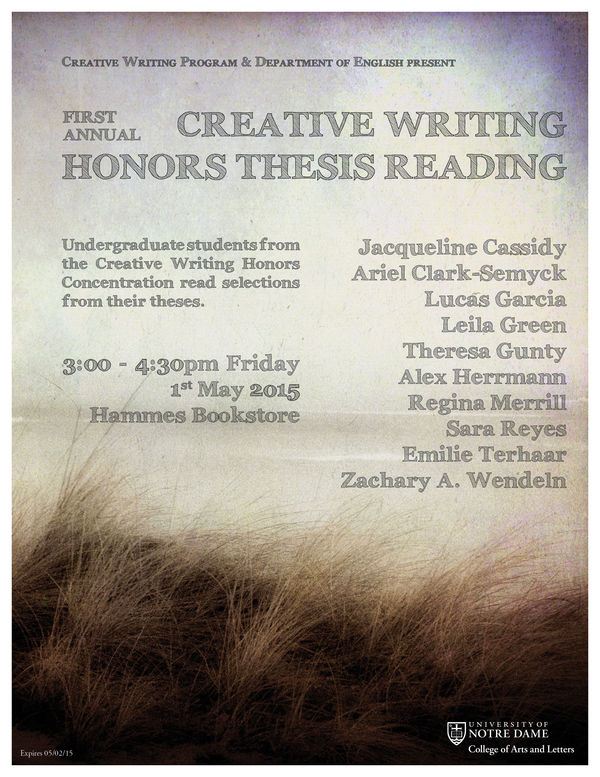 The Creative Writing Honors Thesis Reading will be held from 3-4:30 on Friday, May 1st, 2015 in the Hammes Bookstore.

Students will each read a five-to-seven minute excerpt of their writing. As this is a public reading, all selections will be family-friendly.

Our readers will be:

Jacqueline Cassidy is a freelance writer, poet, and award-winning novelist. She was awarded a silver medal in the Scholastic Art and Writing Awards for her novel, Broken. Her work appears and is forthcoming in the campus literary magazines, A Time To Write and Re:Visions. In addition to writing novels, she enjoys writing and making short films. You can read her work at www.artandwriting.org and http://writingfolly.wordpress.com.

Ariel Clark-Semyck is an English and Psychology double major, which means she ends up discussing Freud more often than she would prefer.  Poetry is a sacred space for pre-analyzed dreams.  Her creative thesis in poetry primarily explores family dynamics and gender relations through the destruction and reconstruction of fable and fairytale traditions.

Lucas Garcia writes from desert mountains, and river valleys and from 7000 feet above sea level. Born and raised in Albuquerque, NM before Breaking Bad started filming but after Bugs Bunny took a wrong turn, Lucas's work has been featured in Re:Visions, the Notre Dame Creative Writing Department annual literary journal. Free time is spent with friends watching movies, griping about representation in the media, the gender binary and race relations, cooking or at the theatre.

Leila Green “I decided to concentrate in creative writing because I wanted the chance to work closely with my classmates and get feedback and tips for fiction writing. I plan to turn my creative writing honors thesis into a novel and publish it some day. I am interested in post-colonial literature and writing about places, nostalgia, and intersecting identities.”

Theresa Gunty/Tess Gunty is a South Bend native who enjoys French, theatre, and watermelon. At age 4, she composed her first story--a series of scented-marker drawings titled The Worm Family. She hopes her plot lines have since improved. Her recent work has explored the sometimes symbiotic, othertimes parasitic interplays between narrative, compassion, and identity. Aesthetic influences include surrealist painting, New Wave film, and the musical endeavors of Jón Þór Birgisson. Tess will begin an MFA in creative writing at NYU in the fall.

Alex Herrmann is from Rochester, New York. He writes fiction. In elementary school, he wrote a short story where the main character died on the first page. He hasn't killed anyone off since. His thesis project, Chew, deals with coincidences, conspiracies, and confusion as a boring guy tries to make sense of a not-so-boring situation.

Regina Merrill is a graduating senior with majors in English and Japanese. Her writing is concerned with addressing stereotypes and reformulating tropes in the Young Adult genre.

Sara Reyes is a senior English Major with a Creative Writing Concentration. She has been interested in poetry since she first read Neruda’s Twenty Love Poems and a Song of Despair. Moving from city to city as a child, Sara was prone to watching those around her with a wallflower-like quality. As Sara grew up this became a preoccupation with the nature of loneliness; which has manifested itself in her creative writing thesis. This cumulation of work explores the inner-landscape  of loneliness, the most isolating emotion. The irony, Sara found, is when an individual feels most alone she cannot see those around her holding out their hands to her. With the completion of this thesis project and her senior year at the University of Notre Dame, Sara prepares herself for the supposedly “real” world with anticipation and trepidation.

Emilie Terhaar is an English and Spanish major. She writes fiction and poetry. Originally from Connecticut, she draws upon the upper middle class professional atmosphere of her home state in much of her writing. Her thesis, Jeremy, is a novella that explores consumer culture, class, and identity issues through quotidian events. The novella argues that not all stories and not all protagonists require growth or linear plotlines with climactic moments. Writing Jeremy from a first person perspective was more than a chore for Emma who likes to consider herself very other from her protagonist.

Zachary A. Wendeln is a senior from Aurora, Ohio, double-majoring in English (Creative Writing Honors) and Film, Television, and Theatre (Film History and Theory).  His Creative Writing Honors Thesis, Field Below, is a dramatic adaptation of the myth of Persephone, meant to be performed immersively and site-sympathetically, and which is set to be produced in workshop form at the Birdsell Mansion in Downtown South Bend April 30, May 02, and May 03, 2015.  Zachary is interested in the marriage of poetry, cinema, and theatre, specifically the intersection of the verbal and the visual, the multisensory, in drama, and the potential expansion of the actor-audience-narrative relationship to include higher agency and engagement on the part of the audience.  After graduation, Zachary will be assistant directing Love's Labour's Lost and working as an arts administrative intern at the Notre Dame Shakespeare Festival for their Summer 2015 program.  He ultimately hopes to start his own theatre company down the way and continue writing and directing.

Please invite your friends, roommates, and others to come and enjoy this peek into honor concentrators' writing. This will be an exciting chance to celebrate the work they have been crafting all year!