A collection of the most recent books from our faculty. 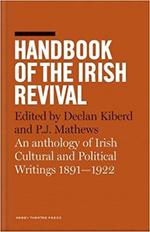 Handbook of the Irish Revival: An Anthology of Irish Cultural and Political Writings 1891–1922

Handbook of the Irish Revival offers a glittering array of texts in which authors such as James Joyce, James Connolly, and W.B. Yeats appear alongside eloquent but lesser-known contemporaries like Mary Colum, John Eglinton, and Helena Molony. Featuring insightful introductions and commentaries by Kiberd and Mathews, the book conveys the ideas of a brilliant generation which, in spite of difficulty and demoralization, audaciously shaped a modern Ireland.

Handbook of the Irish Revival was shortlisted in The Journal.ie Best Irish Published Book of the Year category, in the Bord Gáis Energy Irish Book Awards 2015.

To celebrate the centenary of the 1916 Rising, 16 is a limited-edition, fine-press collection of poetry and art. Poetry, more than any other art form, is intimately connected to the events of Easter 1916. Three of the executed signatories of the Proclamation were recognized poets of their day, who had used their poems to espouse the cause of revolutionary nationalism. For 16, Poetry Ireland invited four contemporary poets to present their own responses to the Rising and its aftermath. In addition, Stoney Road Press commissioned four limited edition prints by Irish artists and invited Irish literary scholar Declan Kiberd to write the introduction. To complement the introduction, he chose eight poems relevant to the notion of Ireland’s freedom and the sacrifices of those who lived and died to attain that cherished goal. 16 will be available in a limited edition of 150, each signed by the living writers and artists. 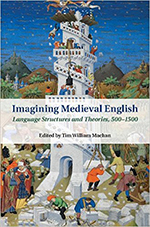 Imagining Medieval English is concerned with how we think about language, and simply through the process of thinking about it, give substance to an array of phenomena, including grammar, usage, variation, change, regional dialects, sociolects, registers, periodization, and even language itself. Leading scholars in the field explore conventional conceptualizations of medieval English, and consider possible alternatives and their implications for cultural as well as linguistic history. They explore not only the language’s structural traits, but also the sociolinguistic and theoretical expectations that frame them and make them real. Spanning the period from 500 to 1500 and drawing on a wide range of examples, the chapters discuss topics such as medieval multilingualism, colloquial medieval English, standard and regional varieties, and the post-medieval reception of Old and Middle English. Together, they argue that what medieval English is depends, in part, on who’s looking at it, how, when, and why. 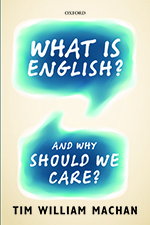 What is English And Why Should We Care? 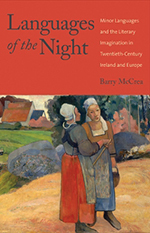 Languages of the Night: Modern Languages and the Literary Imagination in Twentieth-century Ireland and Europe

In the first decades of the 20th century, rural populations throughout Europe changed the language they used in everyday life, abandoning their traditional vernaculars—such as French patois, local Italian dialects, and the Irish language—in favor of major metropolitan languages such as French, Italian, and English. McCrea argues that this sudden linguistic homogenization was a key impulse in the development of literary modernism. The decline of rural vernaculars caused these languages to become the objects of powerful longings and projections. Seán Ó Ríordáin in Ireland and Pier Paolo Pasolini in Italy reshaped minor languages for use as private idioms of poetry; the revivalist idealization of Irish as a lost utopian language deeply affected the work of James Joyce; the disappearing dialects of northern France seemed to Marcel Proust to offer an escape from time itself. 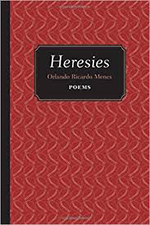 Heresies is an invocation of Latin American and Caribbean culture, history, and spirituality. Through free verse and poetic forms, the collection is visually charged and sonically rich. The poems incorporate history, legend, and magical realism to create a cross-cultural baroque feeling. Heresies is witty, probing, transgressive, and carnivalesque. 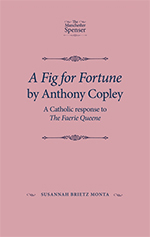 A Fig for Fortune by Anthony Copley: A Catholic Response to The Faerie Queene

Anthony Copley’s A Fig for Fortune was the first major poetic response to Edmund Spenser’s The Faerie Queene. Written by a Catholic Englishman with an uneasy relationship to the English regime, A Fig for Fortune offers a deeply contestatory, richly imagined answer to 16th-century England’s greatest poem. Through its sophisticated response to Spenser, A Fig for Fortune challenges a contemporary literary culture in which Protestant habits of thought and representation were gaining dominance. This book comprises the poem’s first scholarly edition. It offers a carefully annotated edition of the 2000-line poem, an overview of English Catholic history in the 16th century, a full biography of Anthony Copley, an assessment of his engagement with Spenser's Faerie Queene, and information on the book’s early print history. Extensive support for student readers makes it possible to teach Copley’s poem alongside The Faerie Queene for the first time. 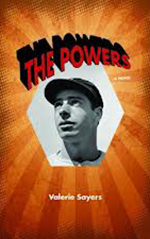 1941 is a year of drama and spectacle for Americans. Joe DiMaggio’s record-breaking hitting streak enlivens the summer, and winter begins with the shock and horror of the Japanese attack on Pearl Harbor. The news from Europe is bleak, especially for the Jewish population. Joltin’ Joe, possessing a sweet swing and range in center, also has another gift: he can see the future. And he sees dark times ahead. In both realistic and fantastic chapters, Sayers transports the reader to an age filled with giants: Dorothy Day and Walker Evans appear beside DiMaggio. The problems they face, from Catholic antisemitism to the challenge of pacifism in the face of overwhelming evil, play out in very public media, among them the photography of Evans and the baseball of DiMaggio. At once magical and familiar, The Powers is a story of witness and moral responsibility that will, like Joe DiMaggio, find some unlikely fans.