Literature courses are practices in close reading, but one class at Occidental College is equally an exercise in active listening. Taught by James Ford III, who will join the Occidental faculty this fall as an assistant professor of English and comparative literature studies, the course explores the aesthetic and philosophical evolution of the music genre known as hip hop. Rob Cain ’91 is the chief information officer, enabling functions, for The Coca-Cola Company. During a recent visit to campus, the English major shared his thoughts on the value of a liberal arts education from Notre Dame—both as an alumnus and a hiring manager. Kathryn Kerby-Fulton, professor and Notre Dame Chair in English, has been awarded a grant from the National Endowment for the Humanities (NEH) for her book project titled Professional Reading Circles, the Clerical Proletariat, and the Rise of English Literature. She was also recently elected as a fellow in the Medieval Academy of America.

Literature courses are practices in close reading, but one class at Occidental College is equally an exercise in active listening. Taught by postdoctoral fellow James Ford III, who received his Ph.D. in English from Notre Dame in 2009, the course explores the aesthetic and philosophical evolution of the music genre known as hip hop. Ford, who will join the Occidental faculty this fall as an assistant professor of English and comparative literature studies, also teaches an advanced course called Black Reconstruction: Reading Radicalism in African American Literature.

English and anthropology major Caitlin Wilson traveled down the rabbit hole for her senior thesis, which examines the connection between Victorian children’s literature and ethnography, or the anthropological study of customs and cultures. 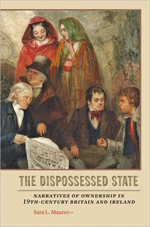 Maurer connects the Victorian novel’s preoccupation with the landed estate to 19th century debates about property, specifically as it played out in the English occupation of Ireland. By focusing on the ownership of land, The Dispossessed State…