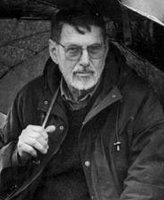 Renowned poet Robert Creeley (1926–2005) was a master bookshelf builder, driven by a need to keep his beloved books “safe, sorted, and out of harm’s way,” says his widow, Penelope Creeley.

Thanks to a Library Acquisition Grant from the University of Notre Dame’s Office of the Provost, some 200 volumes of the late poet’s works are now safely tucked away in the special collections section of Notre Dame’s Hesburgh Libraries, with hundreds more to follow.

After co-editing Form, Power, and Person in Robert Creeley’s Life and Work, Stephen Fredman, professor of English, was awarded $125,000 to support the purchase of Creeley’s library, the total cost of which tops $600,000.

“This will really help put us on the map as a holder of a major poet’s materials,” Fredman says. “People will come from around the world to look at it.” 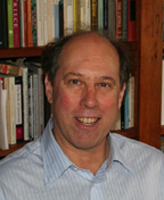 In addition to aiding scholars, the collection is of benefit to students because they have the opportunity to compare their reading experiences in the classroom with actual visits to look at the original books from which their readings are taken, and experience first hand how the accumulated artifacts of Creeley’s life have become part of cultural history.

Many of the acquired volumes and special editions, not widely available to the public, are filled with letters, tickets, articles, and reviews, placed there by the poet.

“The books had become a beloved record of his life,” Penelope says. “They contained the ideas, the thoughts, the speaking breath of his friends. He did not write in books, but kept things in them—mementos of contact in the world with increasingly scattered, dear friends.”

This deeply personal look into Creeley’s private life through his books will be further enhanced with the acquisition of an additional 11 museum-quality artist books that are a collaboration of Creeley and other artists.

“Books with artists, the collaborations, were an exceptional source of excitement and energy for Robert,” says Mrs. Creeley. “I think the source of joined envisioning took him outside himself in a different way.” 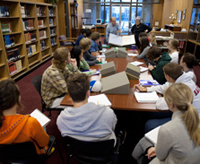 Further study of the collection, according to Fredman, will change perceptions of Creeley, as a hermetic poet, writing in Dickinsonian isolation, to that of a writer actively participating in circles of writers, artists, publishers, editors, and musicians—working in the center of these groups.

In the future, the library hopes to make fellowships available for people to use the Creeley collection and eventually organize a conference around it—a fitting tribute to a poet who believed that art should be shared:

“Robert always believed knowledge, wisdom, experience could not be owned, was not something to be kept to one’s self like a miser, but to be used and shared, built on and passed on,” Penelope Creeley says. “If his books can go on being read, can give a picture of his diversity even in some small way can go on teaching, then he is still alive, will always be alive, among those pages.”

Originally published by Susan Guibert at newsinfo.nd.edu on December 19, 2011.