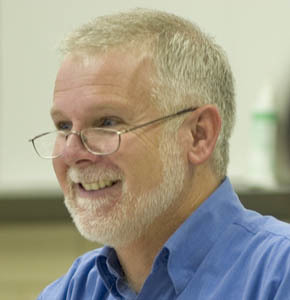 Stephen M. Fallon, a professor in the Program of Liberal Studies and the Department of English at the University of Notre Dame, has been named the 2011 Honored Scholar by the Milton Society of America. The honor is the association’s lifetime achievement award, and past winners include C.S. Lewis, William Empson and Stanley Fish.

“Milton scholarship is an important—and crowded—field in literary scholarship. To be recognized as being at the top of that field is a very high honor,” says Professor John Sitter, chair of the Department of English. “If there were a Nobel Prize for Miltonists, Steve Fallon would be on his way to Stockholm.”

Fallon, the Rev. John J. Cavanaugh, C.S.C., Professor of the Humanities, says the award was a surprise. “To teach a writer as complex and beautiful as Milton is its own reward; to be named among some of the scholars whose work I most admire is humbling,” he said.

Fallon specializes in Milton and early modern literature and intellectual history. He has written two award-winning books on Milton. Milton Among the Philosophers, which looks at the writer’s materialism in light of 17th century philosophical debates, won the Milton Society of America’s Hanford Award. Milton’s Peculiar Grace: Self-Representation and Authority explores Milton’s distinctive ways of writing about himself against the contrasting background of conventional Puritan autobiography. It won a Choice magazine Outstanding Academic Title award.

He also co-edited The Complete Poetry and Essential Prose of John Milton and is working on a new book that examines areas of convergence between Milton and Isaac Newton. Fallon’s articles on Milton and on the Renaissance have appeared in multi-contributor volumes and various academic journals, including PMLA and the Journal of the History of Ideas.

Fallon serves on the editorial boards of the Yale Milton Encyclopedia and Milton Studies and has been awarded two National Endowment for the Humanities fellowships and an American Council of Learned Societies fellowship in support of his research.

In 2001, he received Notre Dame’s Sheedy Excellence in Teaching Award, presented annually to an outstanding teacher in the College of Arts and Letters. It was a teacher who sparked Fallon’s own interest in Milton.

“I had a great teacher in college, in a course I didn’t really want to take. It was the Chaucer to Pope English major prerequisite, and I wanted to study nothing but modern fiction,” Fallon says. “I sort of held my nose and took the course—and ended up loving everything in it, especially Milton, and I really haven’t looked back.”

After decades dedicated to studying the author, Fallon says he continues to be amazed and intrigued by Milton and his work.

Fallon, former chair of the Program of Liberal Studies, doesn’t just share his Milton passion and expertise with fellow Milton scholars and his students at Notre Dame. With Clark Power, he co-founded and continues to teach a course on literary and philosophical classics—including Paradise Lost—at the South Bend Center for the Homeless.

“It is especially gratifying to see this award go to one of the very strongest teachers in the Program of Liberal Studies and the English Department who is also a great citizen of the University,” Sitter says. “Fallon is a Renaissance man in more senses than one.”

As the Milton Society of America’s honored scholar, Fallon will deliver the address at the group’s annual meeting in Los Angeles in January 2011. The society’s membership includes nearly 600 active scholars from around the globe.