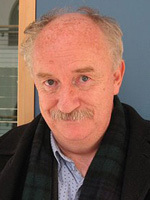 Kiberd, whose appointment took effect in 2011, was previously chair of Anglo-Irish Literature and Drama at University College Dublin (UCD). At Notre Dame, he teaches fall semesters in Ireland and spring semesters on the South Bend campus.

“Declan Kiberd is the major figure in the field of Irish studies, whose research commands international acclaim,” says Christopher Fox, director of the Keough-Naughton Institute for Irish Studies. “As former graduate students of Declan’s and Notre Dame students who studied with him in the Dublin program at UCD attest, he also is an extraordinary teacher. His arrival strengthens an already thriving research and teaching center in the Keough-Naughton Institute for Irish Studies. It is not an overstatement to say that his presence on the Notre Dame faculty reinforces our position as the world leader in Irish Studies for years to come.”

“In addition to his unique expertise in Irish literature, Declan Kiberd brings to Notre Dame students his deep knowledge of modern literature generally,” says John Sitter, English department chairman. “He also brings to the study of fiction an engaging ethical commitment. The subtitle of the book he published recently on Joyce’s Ulysses—The Art of Everyday Living—is earned on every page. It is a brilliantly accessible model of how to read complex fiction in relation to daily experience.”