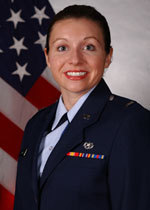 
As the recipient of the 2010 Rev. William Corby, C.S.C., Award, Captain Wendy Sue Kosek '04, '07 J.D., is recognized for her distinguished military service and for her dedication to serving her country. This award is named for the University of Notre
Dame's third president, who himself was a celebrated military man, serving as chaplain to the Union Army's Irish Brigade during the Civil War.

After law school, Capt. Kosek joined the Little Rock Air Force Base legal office as an assistant staff judge advocate before being deployed in June 2009 to Baghdad, Iraq. Just two months into her deployment to support Operation Iraqi Freedom, Capt. Kosek's convoy was struck by an improvised explosive projectile that is formed to penetrate armor and release shrapnel in all directions. Capt. Kosek sustained significant injuries to her face, hands, and calf. A larger piece of shrapnel shattered the top of her right tibia and lodged behind her knee.

Following numerous surgical procedures to repair her wounds, Capt. Kosek tackled her rehabilitation with the same tenacity she dedicates to her service. Relying on her "go-getter" approach to life, she refused to let her injuries keep her down. For her drive and dedication, Capt. Kosek was awarded the Purple Heart, an Air Force Combat Action Medal, and a Joint Service Commendation Medal for her service. 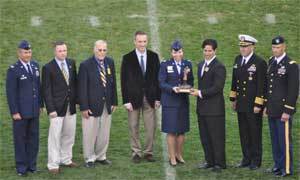 Capt. Kosek's response:
Being injured in Iraq by an IED blast in August 2009 was one of the most difficult times in my life. Thankfully, my best friends immediately came to my aid. In addition to my best friends, my family and I were surrounded by the tremendous support of the Notre Dame family. Through cards, letters, phone calls, and gifts, I truly understood what it meant to be part of the Notre Dame family—to be cared for, loved, and prayed for by so many others who share a common bond—a connection to Notre Dame. I am extraordinarily grateful to have experienced firsthand the Notre Dame family in action, and to know, without a doubt, that there is no place else like Notre Dame.

Established in 1985, this award is conferred on an alumnus/alumna (living or deceased) who has distinguished himself or herself in military service. The award is presented in honor of Notre Dame's third president, who was a celebrated Civil War chaplain of the Union Army's Irish Brigade.