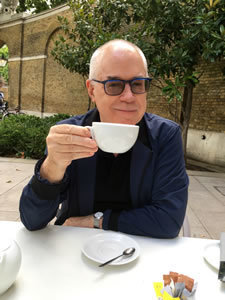 The English Department is pleased to announce that our 2018 Yusko Ward-Phillips Lecturer is David Wallace, Judith Rodin Professor of English at the University of Pennsylvania. Professor Wallace's lecture, "Sacrifice Your Daughter: Coping with Catastrophe in Chaucer and the Book of Judges​," will take place at 7:00 pm Thursday, April 12, in the Eck Center Auditorium. A reception will precede the lecture. This event is free and open to the public, no tickets required.

David Wallace has been Judith Rodin Professor of English, University of Pennsylvania, since 1996, with visiting stints at London, Melbourne, Princeton, and Jerusalem (twice). He is a Fellow of the English Association and currently President of the Medieval Academy of America. He is the author or editor of ten books, including Premodern Places and The Cambridge History of Medieval English Literature. His primary commitments are to Europe and European literatures, to the performance and enjoyment of poetry (especially Chaucer), and to helping secure a viable future for younger scholars.

In 2016 Oxford University Press published Europe: A Literary History 1348-1418, ed. David Wallace, 2 vols. This Europeanist project breaks from traditional, nineteenth-century nation state paradigms (Italian literary history, German literary history, etc.) since "Italy" and "Germany" did not exist as political states earlier on. It therefore unfolds through eighty-two chapters and nine itineraries that follow routes of trade, pilgrimage, military alliance, religious affiliation, and disease. Its expanded geographical vision assumes that Europe, which has no definite geographical limits, can be understood only with reference to regions thought to lie beyond its periphery. It considers intricate literary linkages between northern African shorelines and locales such as al-Andalus and Sicily, with Islam long integral to European space.  Rome-centered, Latinate cultures as considered by earlier literary histories are here supplemented by Greek and Byzantine, Armenian and Slavic, Arabic and Hebrew writings across a wide range of locales.

The Yusko Ward-Phillips Lecture, organized and sponsored each year by the Department of English, honors two devoted and distinguished former professor of English at the University of Notre Dame: Leo L. Ward, C.S.C., and Charles Phillips. Rev. Ward taught at the university and received many honors as a writer of short fiction. A poet, critic, and playwright, Charles Phillips was a faculty member who was instrumental in developing the university’s theater program. The Ward-Phillips Lectures were inaugurated as a lecture series in 1966, and are generously funded by the Yusko Endowment for the Department of English. Past Yusko Ward-Phillips lecturers include Elie Wiesel, Cornel West, Terry Eagleton, Edward Said, Seamus Heaney, Margaret Atwood, Judith Butler, Bruno Latour, and Amitav Ghosh.