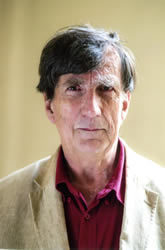 The English Department is pleased to announce that our 2016 Yusko Ward-Phillips lecturer is Bruno Latour. Professor Latour will speak at 6:30 pm Thursday, November 3, on "Does the Body Politic Need a New Body?" in the McKenna Hall Auditorium. This event is free and open to the public, no tickets required.

Bruno Latour is a French philosopher, anthropologist, and sociologist, who is especially known for his work in science and technology studies and considered a central figure in contemporary discourse. He is a professor at the Institut d’Etudes Politiques (Sciences Po) de Paris, France, and part-time Centennial Professor at the London School of Economics.

Professor Latour is well known for developing new lines of inquiry about materiality, modernity, ecological crises, scientific practices, religious practices, and numerous other subjects. His work provokes collaborative interactions between social scientists and bench scientists, literary critics and scholars of cutting-edge technology, archaeologists, and ecologists. His work in actor-network theory (ANT)—an approach to social theory, which explores objects as social networks—concentrates on empirically-based analyses of connections, embracing the contributions of all participants to the makings of institutions, events, and histories.

Recent books include On the Modern Cult of the Factish Gods (2009); Reassembling the Social: An introduction to Actor-Network Theory (2005); and Politics of Nature: How to Bring the Sciences into Democracy (2004). He has a particular gift for framing the complex in trenchant terms that clarify them for a broad audience. Professor Latour’s efforts to reach others have transported him outside the academy—involving him in the production of numerous art installations, re-enactments, MOOC’s, and digital humanities projects.

Bruno Latour is the recipient of the Holberg Memorial Prize for 2013 and the Siegfried Unseld Prize in 2008. He is Doctor Honoris Causa of five prominent universities (Lund, Montreal, Lausanne, Goteborg, and Warwick) and an elected fellow of the American Academy of Arts and Sciences.

The Yusko Ward-Phillips Lecture, organized and sponsored each year by the Department of English, honors two devoted and distinguished former professor of English at the University of Notre Dame: Leo L. Ward, C.S.C., and Charles Phillips. Rev. Ward taught at the university and received many honors as a writer of short fiction. A poet, critic, and playwright, Charles Phillips was a faculty member who was instrumental in developing the university’s theater program. The Ward-Phillips Lectures were inaugurated as a lecture series in 1966, and are generously funded by the Yusko Endowment for the Department of English. Past Yusko Ward-Phillips lecturers include Elie Wiesel, Cornel West, Terry Eagleton, Edward Said, Seamus Heaney, Margaret Atwood, and Judith Butler.