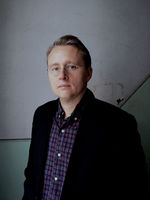 Roy Scranton is the author of Learning to Die in the Anthropocene: Reflections on the End of a Civilization (City Lights, 2015), and co-editor of Fire and Forget: Short Stories from the Long War (Da Capo, 2013). His journalism, essays, criticism, and fiction have been published in The Nation, Rolling Stone, The New York Times, Contemporary Literature, The Appendix, LIT, Theory & Event, and elsewhere. He holds an MA in Liberal Studies from the New School for Social Research and a PhD in English from Princeton. He is currently a post-doctoral research fellow at the Center for Energy and Environmental Research in the Human Sciences at Rice University. His novel, War Porn, will be published this fall from Soho Press. He is currently working on a book about the politics of trauma in American World War II literature.