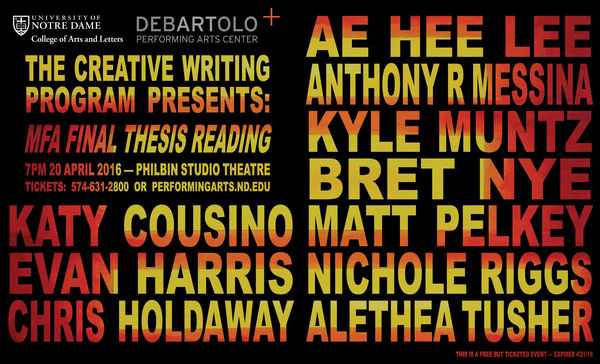 Second year students of the Masters of Fine Arts in Creative Writing at the University of Notre Dame will be reading from their final theses at the Regis Philbin Studio Theater in the DeBartolo Performing Arts Center on April 20th, 2016 at 7:00 p.m.

This event is free, but you will need a ticket to attend. You can get your ticket at the DeBartolo Performing Arts Center.

The event will include 5-minute readings from five poets and five fiction writers:

Katy Cousino is from Clay, West Virginia. She likes horror movies, her two cats, community involvement, and writing poetry. She also has a turtle named Morla. Her work can be found at Deluge, Tagvverk, and Seven Corners, and is forthcoming at glitterMOB.