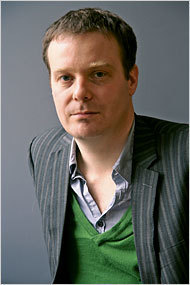 The English Department is pleased to announce that our 2015 Duffy Lecturer is writer and artist Tom McCarthy, whose most recent novel, Satin Island, has been shortlisted for the 2015 Man Booker Prize. The 2015 Duffy Lecture, entitled "Nothing Will Have Taken Place Except the Place," will take place (or not) at 5:30 pm, Thursday, October 29, in the Eck Center Auditorium. A reception will follow.

Tom McCarthy was born in 1969 and grew up in London. His creation, in 1999, of the International Necronautical Society (INS), a ‘semi-fictitious organisation’ that combines literature, art and philosophy, has led to publications, installations and exhibitions in galleries and museums around the world, from Tate Britain and the ICA in London to Moderna Museet in Stockholm and The Drawing Center in New York. Tom regularly writes on literature and art for publications including The New York Times, The London Review of Books, and Artforum. His books include Remainder (2006), Men in Space (2007), and C (2010).