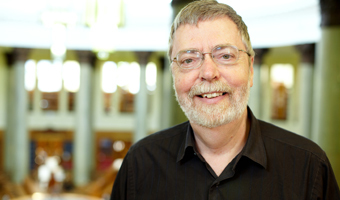 The English Department is pleased to announce that our 2014 Duffy Lecturer is David Fairer, Professor of Eighteenth-Century Literature at the University of Leeds. The 2014 Duffy Lecture, entitled "Sustainable Economies: Lessons from the Eighteenth-Century Georgic," will take place at 5:00 pm, Wednesday, October 8, in the McKenna Hall Lower Level. A reception will follow.

Professor Fairer's research interests center on the field of eighteenth-century poetry, criticism, and scholarship, especially early romanticism, its sources and development. He is particularly interested in tracing connections between the eighteenth century and the so-called ‘Romantic period,’ and relating them to contemporary debates about ideas of continuity – a concept that became crucial during the years of the French Revolution and its aftermath. His most recent book, Organising Poetry: The Coleridge Circle, 1790-1798 (OUP, 2009), argues that in two related areas, personal identity and history, earlier eighteenth-century writers developed new organic ways of thinking about human experience in which issues of continuity were in question, and that these can offer fresh perspectives on the poetry of Coleridge, Wordsworth, and their friends in the 1790s.

His wider research on eighteenth-century poetry covers the full range: Pope and Swift, pastoral, landscape and georgic poetry; the work of women poets (Finch, Montagu, Leapor, Barbauld); Gray, Collins, the Wartons; Chatterton, Macpherson, Cowper, etc. He is also interested in epistolary writing of all kinds; the growth of literary history and historical scholarship in the eighteenth century; the sublime in literature and painting; eighteenth-century aesthetics; lyric, gothic and sentimental modes; Spenser, Shakespeare, and Milton in the eighteenth century; Blake as poet and artist.