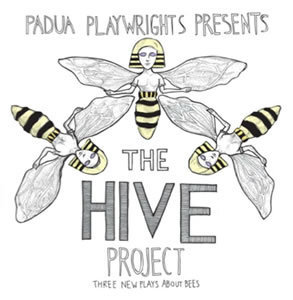 A presentation of the Padua Playwrights in conjunction with the 27th Annual Meeting of the Society for Literature, Science, and the Arts (SLSA). Free admission.

Henri Bergson described human intelligence as a spotlight accompanied by a fringe of instinct. In going from the human to the animal, we leave the light, pass through the penumbra, and then find ourselves in a dark - a dark what? These three plays ask what if animals could travel in the opposite direction, after watching us for a long time, from the dark to the light, with sudden access to human language? As an art-form involving high-level social collaboration, theater provides an ideal medium in which to probe the human-bee interspecies boundary. A collaboration with composer-musicians April Guthrie, Theo Goddell and Sarah Holtschlag and a gifted ensemble of performers, these three playful and darkly comedic plays make the theater space, at least temporarily, into a hive.

The three plays are:

"The Padua playwrights embody a true voice of Los Angeles as much as Steppenwolf embodies a voice of Chicago."