Wednesday, April 18
Milton’s Hymens and Their Implications for Our Time

ALL EVENTS ARE SCHEDULED TO BEGIN AT 5:00 PM IN THE ECK VISITOR’S CENTER AUDITORIUM

Margaret Ferguson, Distinguished Professor of English at the University of California at Davis, has taught also at Yale, Columbia, and the University of Colorado at Boulder.  Her book Dido's Daughters: Literacy, Gender, and Empire in Early Modern England and France (University of Chicago Press, 2003) won the Roland Bainton Prize for Sixteenth Century Studies and was the co-winner of the Society for the Study of Early Modern Women Prize.  Author of Trials of Desire: Renaissance Defenses of Poetry and many articles on authors ranging from St. Augustine through Elizabeth Cary to Freud, Ferguson has co-edited thirteen books and special issues of journals. Among these are Teaching Early Modern Prose (with Susannah Brietz-Monta); Feminism in Time; The Norton Anthology of Poetry; Elizabeth Cary. The Tragedy of Mariam, Faire Queen of Jewry (1613) and The Lady Falkland: Her Life; Postmodernism and Feminism; Remembering Milton; and  Rewriting the Renaissance: The Discourse of Sexual Difference in Early Modern Europe. She has served on many committees of the Modern Language Association and will become President in 2015. She has served also on the executive board of the Renaissance Society of America and as a trustee of the Shakespeare Association of America. She received teaching awards at Yale and the University of Colorado and an Outstanding Graduate Mentor Award at the University of California, Davis.  Chair of the UC Davis English Department from 2006 to 2009, she has won fellowships from the NEH, the Guggenheim Memorial Foundation, and, most recently, from the American Council of Learned Societies to support research for her current book, which is entitled "Missing the Maidenhead: Cultural Debates About the Hymen in Early Modern England." 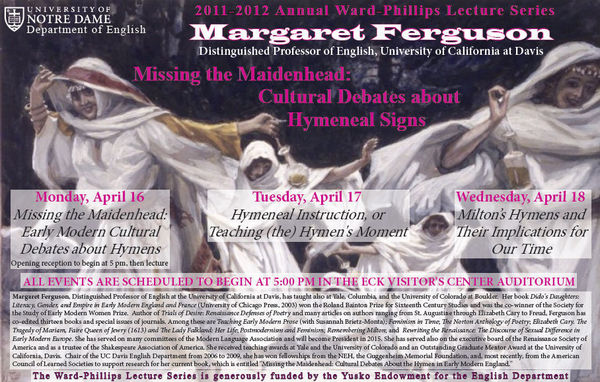