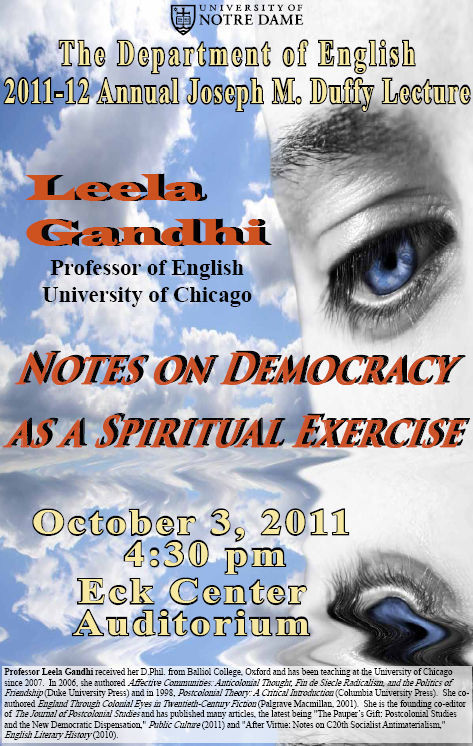 Notes on Democracy as a Spiritual Exercise

Professor Leela Gandhi received her D.Phil. from Balliol College, Oxford and has been teaching at the University of Chicago since 2007. In 2006, she authored Affective Communities: Anticolonial Thought, Fin de Siecle Radicalism, and the Politics of Friendship (Duke University Press) and in 1998, Postcolonial Theory: A Critical Introduction (Columbia University Press). She coauthored England Through Colonial Eyes in Twentieth-Century Fiction (Palgrave Macmillan, 2001). She is the founding co-editor of The Journal of Postcolonial Studies and has published many articles, the latest being "The Pauper’s Gift: Postcolonial Studies and the New Democratic Dispensation," Public Culture (2011) and "After Virtue: Notes on C20th Socialist Antimaterialism," English Literary History (2010). Her research and teaching interests include sixteenth- and seventeenth-century drama, the culture of late-Victorian radicalism, Indo-Anglian literature, and Postcolonial theory. Her current work pays closer attention to the insistent allegiance between ‘politics’ and ‘ethics’ in anticolonial endeavour.

This lecture series honors Joseph M. Duffy (1924-1988), who taught at the University of Notre Dame from 1954 to 1988; a great teacher scholar, he numbered among his students James Chandler and J. Dudley Andrew, among others.