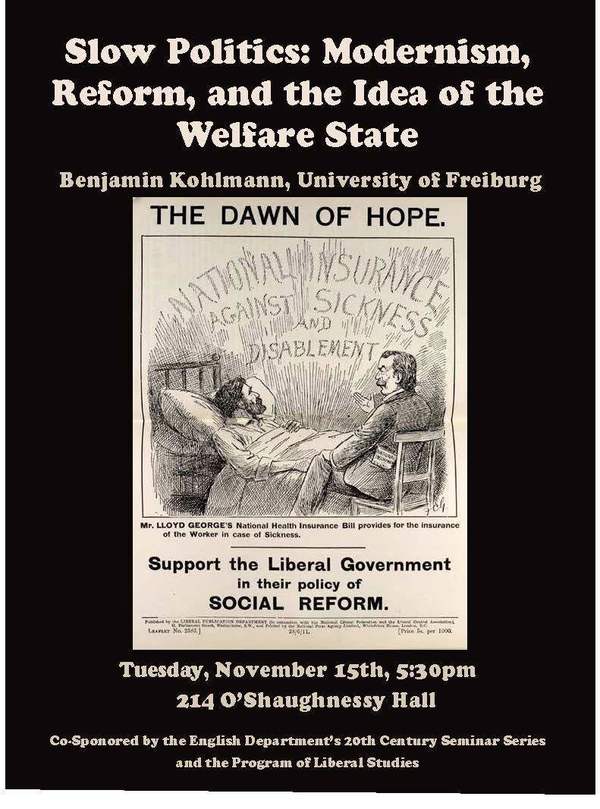 Benjamin Kohlmann  is the author of Committed Styles: Modernism, Politics and Left-Wing Literature  in the 1930s  (Oxford UP), on the Auden circle's flirtation with Communism. He is also the editor of Edward Upward and Left-Wing Literary Culture in Britain (Ashgate) and co-editor of Utopian Spaces of Modernism: British Literature and Culture 1885-1945 (Palgrave).

This paper outlines a literary prehistory of the welfare state through readings of works by Edward Carpenter, H. G. Wells, E. M. Forster, and Virginia Woolf. By focusing on the slow politics of reform I foreground a temporality of institutional change – and a modality of literary writing – that differs from the aesthetics and politics of rupture commonly associated with the experience of modernity. ‘Reformist’ literary modes project a vision of the state that anticipates Jacques Rancière’s remarks about the “utopia of the centre”: they imagine the emerging institutional structures of the welfare state as deeply connected to the fabric of social life rather than as an ensemble of bureaucratic processes located beyond it or detached from it. By presenting the contours of the welfare state as an embodiment of (class-based) collective ends, these works also provide some critical leverage on current theorizations of the welfare state in literary studies.