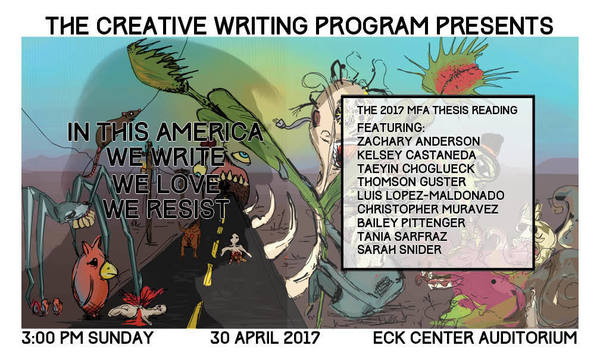 Second year students of the Masters of Fine Arts in Creative Writing at the University of Notre Dame will be reading five-minute selections from their final theses on Sunday, April 30, 2017 at 3:00 PM in the Eck Ctr., Auditorium.

Zack Anderson published poems and essays in Entropy, Smoking Glue Gun, and Deluge, as well as book reviews in Notre Dame Review and Kenyon Review. He has been working on a translation of French-Romanian poet Linda Maria Baros’ collection The A4 Autoroute, with generous notes from the author, and took on a position as a staff writer for American Microreviews and Interviews. Zack will be attending the Graduate Translation Conference at the University of Texas at Dallas in May, after which he will continue West with the tumbleweeds.

Thomson Guster’s recent work includes The Clone Saga, a distorted adaptation of the oft-derided Spider-Man storyline of the same name that explores the empty paranoia of identity, the portability of content across genres and platforms, and the limits of fan fiction; Heat Map #10, ‘a zine of fictional music writing composed by blind evolutionary logic that amplifies mere snags in the infostream into waveforms that threaten to crash their mode; Op, a series of poems that explore the possibilities for self-expression under deep cover; and Crunch Time, a collection of fight scenes that experiment with duration, intensity, choreography, and the limits of the visual in a textual medium.

Luis Lopez-Maldonado spent his summer in New York City as the 2016 Sparks Summer Internship Recipient. In his second year at the University of Notre Dame, he was able to continue working with Ballet Folklórico Azuly Oro, with the Department of Film, Television, and Theatre, and with the St. Joseph County Juvenile Justice Center. He was also published multiple times during the fall and spring semester, which included being published in ROAR, Foglifter, The Packinghouse Review, and in the Poetry Foundation, among others. During his last year at Notre Dame, Luis has completed a full-length manuscript of poetry, and a couple of chapbooks as well.

Chris Muravez’s recent publications include a post-election Facebook rant, some poems in Emerge Literary Journal (for which he was paid a handsome $4.50), and surpassing the 100 Tweet milestone.

Bailey Pittenger continues to teach and write. In March, she collaborated with the local nonprofit, Lit Literary Collective, to create and manage an Art as Resistance event at LangLab, which she hopes will continue to bring together an inclusive community of local art activists. She also served as managing editor of Re:Visions and The Bend, was awarded the Kaneb Center Graduate Student Teaching Award 2016-2017, received a Katharine Bakeless Nason Scholarship from the Bread Loaf Orion Environmental Writers’ Conference 2017 for her fiction manuscript, and published prose in Cosmonauts Avenue, Gigantic Sequins, Entropy, and elsewhere. In the fall, she will be attending the University of Denver for her PhD in English with a concentration in Creative Writing.

Sarah Snider has recently completed her MFA thesis, a collection of thematically and stylistically interconnected memoir essays and stories that explore themes surrounding gender, religion, family, and community to create a broad illustration of life as an Orthodox Jewish woman in America. She presented on the theory behind her work at the English Graduate Student Association’s Graduate Research Symposium in March and led a Film, Television, and Theatre Department Visual Cultures Workshop in May in order to complete her Graduate Minor in Screen Cultures. Sarah spent the last two semesters teaching a new course entitled “Creative Writing and Multiculturalism,” for which she received the Kaneb Center for Teaching and Learning’s Graduate Student Teaching Award. She served as the Nicholas Sparks Intern for Poets and Writers magazine this summer, and she looks forward to honing her teaching skills further as a Visiting Assistant Professor at Notre Dame’s Writing and Rhetoric Program in the 2017-18 school year.